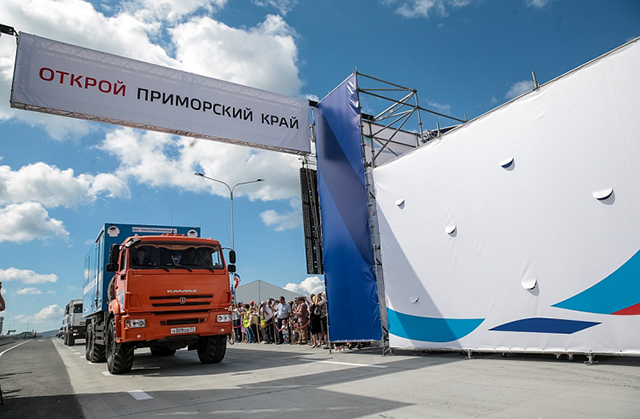 On the 23rd of August the first section of Vladivostok-Nahodka-Vostochny port route, which connects the gambling zone “Primorye” with the international airport, was officially opened.

The length of the area is almost 18 km. The allowed speed is 110 km an hour with axle load of 11.5 t.   The road bypasses the town Artem with its busy roads.

Despite the grand opening  on the 23rd of August (with the participation of the assistant to the president of Russia, Yury Trutnev, and the governor of Primorsky Krai, Vladimir Miklushevsky), the road is functioning from the 26th of August.

The road is a part of a high-speed transport corridor “Primorye 1” from Vladivostok to Vostochny port which excludes the towns of Artem and Bolshoy Kamen. The project has three stages. Construction of the second sector which will connect the gambling zone with Bolshoy Kamen is to be started in the autumn and finished by 2020. The completion date of the whole project is not determined yet.

Please rate this news:
(61 votes, 3.69 out of 5 stars)
Previous publication
Next publication
Sign up to receive news