Germany’s gambling legislation from 2008 was replaced by the ”Interstate Treaty on Gambling 2012” (ISTG). The latter was expected to come into force in January 2012, but there have been a number of aspects regarding it, that faced critism by the European Union Commission. Therefore, its implementation was put off by another six months. The Treaty restrained legal online gambling to one segment only – sports betting. Games of chance were put under general state monopoly, while online gambling activities such as poker and casino-style games were generally prohibited, as was postulated also by the 2008 legislation.

In July 2012 the Interstate Treaty on Gambling was enforced in every federal state, with the exception of the northern state of Schleswig Holstein. The latter refused to join the ISTG and passed a more liberal law on gambling activities. It allowed operators to apply for a license for the majority of gambling options (sports betting, casino-style games and poker), while operators were also permitted to offer them in online environment. As of January 2013 operators obtained approximately 50 licensesfor online sports betting and online casino-style games under the state’s legislation.

In February 2013, after being in force for almost one year, the Schleswig Holstein’s gambling legislation was abolished, which means that since then all federal states have been following the ISTG prescriptions. However, the specific moment was that all the licenses granted under the Schleswig Holstein’s law will not lose their validity until 2018. Those included 23 licenses for sports betting and 13 licenses for online poker, while their holders were allowed to supply online gambling options only to the local market. The remaining operators need to conform to the sterner norms of the Interstate Gambling Treaty.

In 2012 Germany’s gambling industry produced a total of EUR 10.73 billion in gross proceeds, as 85% of the market was under regulation. The unregulated market segment accounted for 15% and generated EUR 1.57 billion in gross proceeds. Within this segment, online casino games captured a share of 22.7% (EUR 357 million) during the year, while online poker had a share of 19.2% (EUR 301 million). 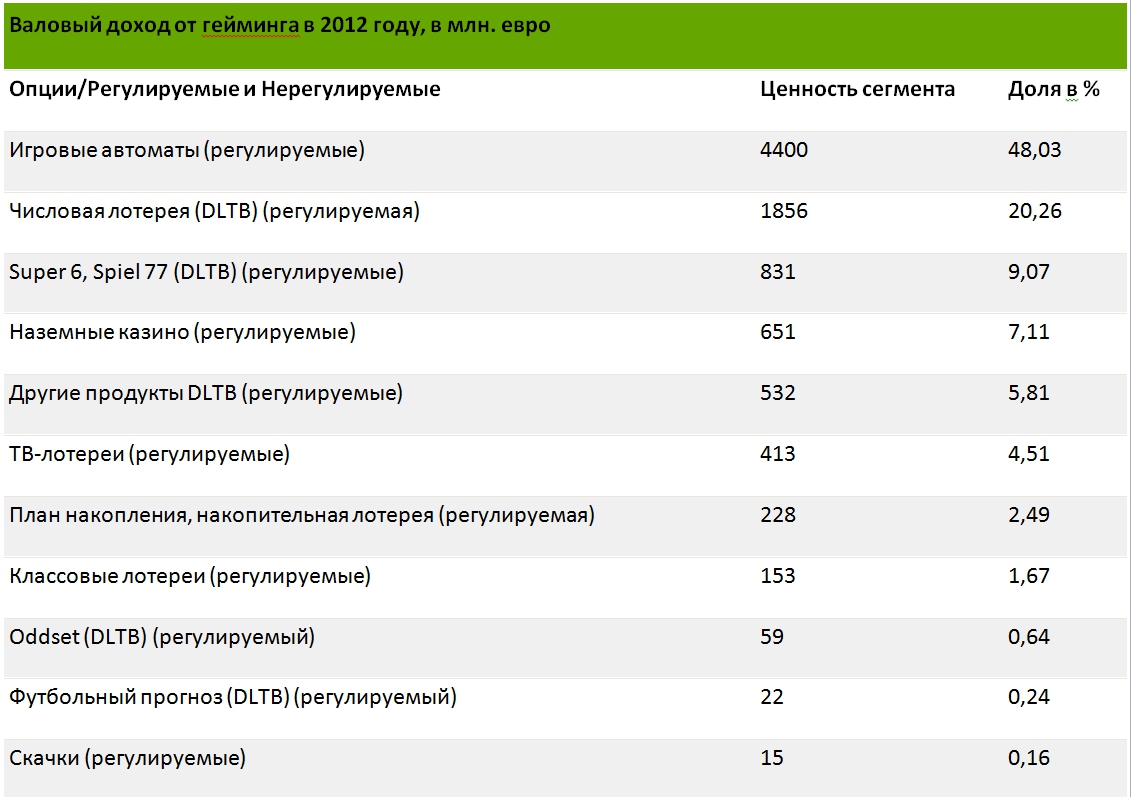 At the same time, the unregulated sports betting segment in the country will probably grow at a compound annual rate of 6.0% within the same period, with betting stakes being at a level of EUR 479 million in 2014 and EUR 571 million respectively.

What the future holds

The ISTG was devised to last until 2021, but some experts have stated it may not live that longer, citing the almost-one-year delay in sports bet licensing. How the matter with regulation will develop in the future depends on both political and legal factors.

The focus of the debate on future legislation seems to have gradually shifted towards the facts instead of being entirely political. The Schleswig-Holstein’s Gaming Act was based on Denmark’s example for a liberal gambling legislation and reflected the need for a new course in policy, because, at present, more gambling operators are in search of a license. What is more, an amended legislation should outline transparency in licensing procedures and should not impose uncompetitive restrictions, such as license number limitations and exclusion of some gambling options (online casino-style games, for example).

On the other hand, the Hessian Ministry of the Interior has said it projects license applicants may file over 80 lawsuits, no matter of what the licensing procedure outcome may be. According to the Ministry, unsuccessful applicants may demand a review of their unfruitful participation, while a number of future licensees may probably litigate against unattractive license conditions.

Last but not least, the European Commission has already expressed its concerns over the compliance of the Interstate Treaty on Gambling in the notification procedure. The federal states have been granted a period of two years in order to evaluate the adaptability of the ISTG. This period expired in July 2014.

In June 2014 the European Court of Justice declared the Schleswig Holstein licenses as being not consistent with EU legislation and, therefore, they would not extend to other German states. The Court also ruled that it was acceptable for a country to have two separate licensing regimes for online gambling, if, of course, the stricter regime did not contradict with European Union decree against limitation of services.

Please rate this news:
(67 votes, 3.7 out of 5 stars)
Previous publication
Next publication
Sign up to receive news