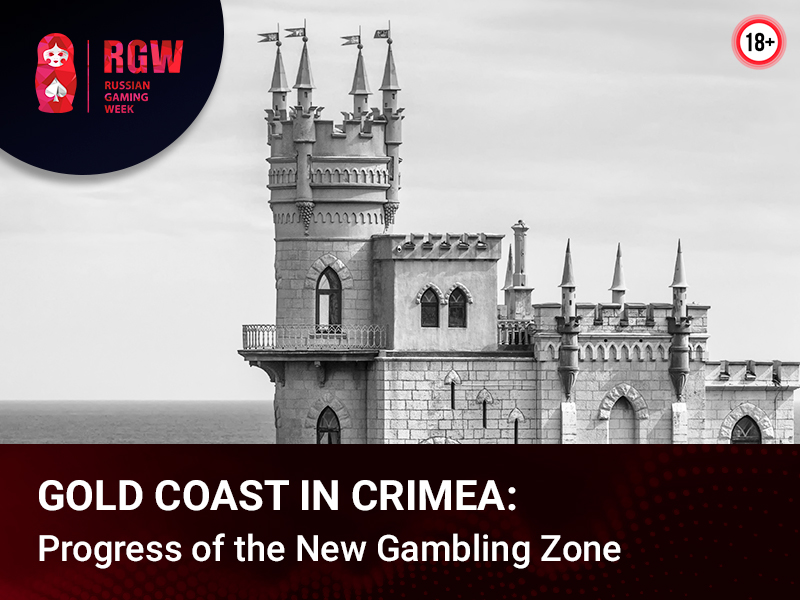 Russia keeps working on the fifth gambling zone project: it will be located in Crimea. The authorities are going to turn an individual location on the peninsula into Russian Las Vegas, establishing a gambling complex called the Gold Coast.

The establishment of the Crimean gambling zone has been legislatively prescribed since 2014. Gambling business development within the peninsula will allow to promote the resort and attract new investments. The Gold Coast is expected to become a source of tax revenues for the treasury as well as to create new jobs.

The Government of Crimea has been extensively discussing the Gold Coast location for several years. It suggested Koktebel, Simferopol, and the territory near the famous Swallow's Nest Castle. The latter was refused in 2018. Now, the fate of the new gambling zone seems to be ultimately defined.

In October 2019, Russian Prime Minister Dmitry Medvedev signed an official decree on the establishment of the Gold Coast gambling zone near Yalta, in the village of Katsiveli. Earlier, one offered to place the zone in the territory of the former health resort – Fortuna.

At the beginning of this year, the investment committee of the Republic of Crimea approved the project preliminary estimated at approximately 3 billion RUB. The casino will be constructed in an area of 14 hectares. Besides, one is planning to build a five-star hotel there.

Last year, rumors were about the start of the construction of the first gambling venues in Katsiveli, but we could not see any real actions. After the official approval of the location, it has transpired that the project will be implemented by Infrastructure Projects Management Company (LLC UKIP).

Financial prospects of the Gold Coast in Crimea

According to Crimean Finance Minister Irina Kiviko, the project is promising in terms of taxes and budget contributions. It will be encouraged by new jobs and the increasing amount of visitors. Due to this gambling zone, the local authorities hope for the all-year-round activity of tourists.

Irina Kiviko stresses that tax liabilities into the budget will be provided by new jobs and casino winnings amounting to 13% of the sum as an income tax. The tax rate for non-residents is 30%. Moreover, the peninsula’s treasury will receive funds from property deductions: the tax will be 1.5%.

According to Article 366 of the Tax Code of the Russian Federation, items of gambling taxation include gaming tables and slot machines. Tax rates are specified by the laws of constituent territories of the Russian Federation in the following amount: one gambling table – between 50,000 and 250,000 RUB; one slot machine – between 3000 and 15,000 RUB.

The Ministry of Economic Development of Crimea reports that the project should be compensated within eight years from the beginning of operations. It is expected that the budget will receive 400 million RUB in five years from the start. The approximate date of construction completion is 2024.

The Russian Federation hosts four official gambling zones, but none of them has become local Las Vegas yet. Challenges occurred at construction stages and after the opening of venues. The promising outlook of the Gold Coast is also doubtful, as the world has imposed heavy sanctions against Crimea, scaring away potential foreign investors.

Nevertheless, Yury Gotsanyuk, Prime Minister of Crimea, notes that the Gold Coast has drawn the attention of three major companies at once. It is unknown who wishes to be a potential investor. Supposedly, all the money for implementation will be given by private entrepreneurs.

The project of the new gambling zone was introduced at the end of the past year, but it was not supported by specialists. Kirill Babeev, the Head of the Union of Architects of Crimea, said that the object was unsuccessful: too kitschy; it would not fit in the natural landscape, leading to the reduction of region reputation.

We still do not have confirmed information about Gold Coast investors, but the authorities have given the green light for the project. The government has proceeded from discussions to certain actions. Currently, one has determined the territory of the future gambling zone and approved the project with a fixed budget.

Nikolay Oganezov, a former Chairman of the Self-Regulated Association of Betting Providers, believes that the investor is already found if the territory issue is solved. The specialist asserts that the tourist flow can be generated using junket tours within a year.

Please rate this news:
(114 votes, 4.28 out of 5 stars)
Previous publication
Next publication
Sign up to receive news